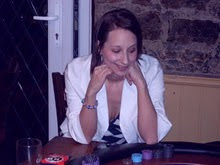 Diane was raised in Cramlington, Northumberland by parents Alan & Margaret along with brother Richard. Diane was educated w/3 tier system & furthered her education to degree level;

Whilst in her final year of CCHS in 1994 Diane began dating Mark & was destined for success with 10+ top end grade GCSE’s. Following sixth form & her A levels Diane started working in a nursing home for elderly patients suffering from dementia whilst waiting for a place at college. She started her nurse training in 1998 at St Martins College, Cumbria & qualified as a staff nurse in 2001. She then returned to Newcastle & started her nursing career in the High Dependency Unit, Newcastle General Hospital & then in Intensive Care where she has worked for the past 6 years. In late 2004 Diane & Mark got married and bought a house in Stakeford where they currently reside. They had their daughter Lauryn Bo in 2006 & recently completed their family adding little boy Zach Ethan in 2009. Diane began playing poker online during the summer of 2008 on PokerStars with Mark’s guidance & although her bankroll dictates she only play’s micro stakes she’s managed to grind a small deposit into 3 figures & still counting. Diane’s live experience is limited as with 2 children being her priority it’s difficult to get over the casino, she’s usually present at family gatherings & has been to the casino a handful of time’s but no success to report yet. Diane is quite unlike the stereotypical poker player that comes into most people's mind when they think of the tough, hard nosed NLH players of the game leading many villains to misperceive her as a "bubbly little blondie with the big smile & twinkling eyes" but Diane can hold her own vs. Newcastle’s talent using her perceptiveness coupled with affability & TAG style. Diane has transcended the game and turned playing poker into a lifestyle, she brings her high fashion sensibility and card-playing expertise with her demonstrating to all you don’t have to sacrifice style & beauty whilst at the felt. She lives a healthy life & works hard to keep her body and mind at their optimum performance levels, spending much of her time away from the felt working to improve her life & lifestyle including feeling & looking good with regular gym visits & an eye for fashion, being an avid reader of authors Virginia Andrews, Martina Cole, & even J.K. Rowling’s ‘Harry Potter’ collection. Diane’s FTP nickname is Dinki which is often abbreviated to Dink for reasons unrelated to poker but because of her petite size & the 1st letter D also being the 1st letter in her Christian name.

Diane believes being a female player is neither an advantage or disadvantage & strives to succeed under all circumstances.
Posted by Daniel Trett
Labels: Biographies