Last weekend the UKIPT visited Aspers, Newcastle and FTP had four runners playing day 1A of the main event on Thursday 16th June, with Dan, Mark, Steve, and George all looking for a share of the prize pool. The day started with 235 players and after eight hour long levels, the field was down to 94 including FTP affiliates;

Steve unfortunately busting 200/400/50 (level 7) with a full house vs. villains straight flush. After merging with the remaining players from day 1B, it meant 252 players came back for day two. This didn't go well for Mark or Dan who bust level nine and eleven respectively, however George managed to make day three and consequently get in the money. To commiserate Mark and I registered for the £300 side event, again no luck as we both bust relatively early in the first day. Back over to the main event, where George joined the final 72 players for day three with a short stack;

So going back with five big blinds at 2,000/4,000/400 level, I got on the rail and hoped he could flip well. Unfortunately he got it all in with KQ vs. 99 and couldn't hit, however he managed to ladder into 62nd place for £850. That evening both Mark and I entered our third UKIPT event, playing the £100 charity bounty tournament. Mark bust early, I made a relatively deep run before busting on the penultimate table. Now it's Monday and the closing event was a £50 satellite to UKIPT Brighton main event which I would normally have skipped, but it had a free seat added by UKIPT and £1,000 worth of seats added by Aspers so yeah the £1,550 free juice enticed me in. I went into this final event zero for three, so including this tournament collectively we (Mark and I) had a total outlay of £2,075 with our only recoup £85 having 10% of George in the main event. The structure meant it was just a case of who flipped the best with 3,000 stack and a 15 minute clock, things didn't go my way and I bust again on the penultimate table. Despite having no success across the festival I had a fantastic weekend, seeing absolute everybody associated with Newcastle poker at least once over the weekend. To close off the UKIPT I would like to congratulate a few of my friends, who made deep runs including Steve Brennan, Rachel Costa, David Grayson, and Keith Ridley who I understand were all in the top thirty of the main event.

Away from the UKIPT grind on June 9th the NPF reopened, this subsequently (as predicted) meant the NEPF suffered a decrease in traffic and very few new threads/post appearing recently. It will be interesting to see if there is room for NEPF in this town, it looks to me like the immovable object (NPF) is winning the war vs. the unstoppable force (NEPF). This is merely an observation and to clarify I wish the best for both forums, as both are ran by friends of mine.

Looking forward and Mark and I fly out to Las Vegas for our second and eighth visit respectively on Thursday 23rd June staying over at Bellagio for ten nights, this should be an ace trip with a bunch of our friends from the Newcastle poker scene in town. These include Dave Collins, Pete Smithson, Steve Gibson, Graeme Morl, Dave Mount, Dom Mahoney, Dave Maudlin amongst others. I gave Mark full control of preparing our poker schedule for the trip, so below is our initial calendar;

So yeah it's a good mixture including events from the five notable festivals in town, giving us an excellent opportunity to visit and play in a lot of the casinos card rooms. However it's subject to change (particularly mine) as it's really heavy and I haven't got the motivation like Mark to grind out tournaments for 10 days straight, so no doubt I'll take each day as it comes and drop games as and when I can't be arsed to play. 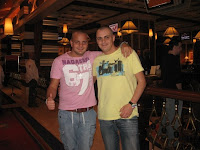 Dan & Mark
Wynn Card Room 2009
So yeah stay tuned next month for our “Las Vegas 2011 Trip Report” which I'm sure will be ace, in the mean time follow our FTP facebook and twitter accounts for regular trip updates.