I arrived back in Sydney on Tuesday 25th June. The time difference between the USA and Australia means I leave the USA on Sunday evening, but lose a full day in flight. No complaints though, everybody hates Mondays anyway right? I naturally spent the full day relaxing and trying to beat the jet lag.

The following evening (Wednesday 26th) I was out on a man date with my boy Steesh Lee, we had dinner at Star Bar and watched World War Z at Event Cinemas. I'm open minded about World War Z, Gerry Lane (Brad Pitt) is called out of retirement by the United Nations to fight against a pandemic that threatens to destroy humanity. I didn't love it to be honest, average at best in my opinion. Couple of days later (Friday 28th) the weather was very wet and windy which restricted my options so I again was back over the cinema so as to take shelter from the bad weather. This time choosing to watch Man Of Steel, which again for me wasn't hugely impressive but still good entertainment for a couple of hours.

On Saturday 29th I was over The Star playing my first tournament since arriving back in Australia. They were hosting a "Rounders Classic" event, which had a $360 buy-in and attracted fifty runners. I both ran and played pretty well here and held over half the chips in play (500,000) with five remaining, then lost 350,000 with Q9 vs. 9T getting it all-in on a 29Q flop and the same guy bust me the same orbit when I got all in preflop with 88 vs. 66 vs. 89s and the board ran AAQQ5 to counterfeit me and the nine played. I bust in fourth for $1,570 which was pretty disappointing and I really liked my chances to take the $6,300 first place and the trophy.

Wednesday 3rd July the weather cleared up somewhat so I took the oppurtunity to press the tourist button, I headed down Circular Quay and booked a cruise to Shark Island. This was a brilliant, relaxing and stress-free day where I enjoyed a nice picnic and breathtaking views of both the Opera House and Harbour Bridge.

On Friday 6th sticking with the relaxing theme I decided to pamper myself in the luxurious and modern spa at Four Seasons Hotel. It's a design-led spa with a stunning lounge and six treatment rooms, as well as change facilities designed to reflect Sydney’s effortless and cool sophistication. Featuring a double whirlpool, gym, sauna and pool facilities. Expertly trained therapists met my skin’s every need with cutting-edge treatments from around the world, and I underwent a body and wellness therapy to relieve my overworked muscles and mind. #sochilledout #relaxandrevive 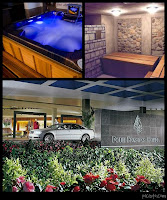 This was ideal preparation for my friends home game the same evening. I went along to Victor Teng's and Brendan Cahill's 200NL home game, which I absolute loved. It's an ideal platform for me to meet new poker friends in Sydney and it was extremely well ran. Fully dealer dealt, rake is 10% capped at $6, complimentary food and drinks, dinner break for Domino's pizza and two tables running. It plays really deep too, at one point during the evening there was $10,000+ on my eight handed table and the same on the second table. This is on every Friday evening and I will make a big effort to get over more often, I had a thoroughly great evening and also profited a modest $625 to make things even sweeter. On Saturday 6th July I was aboard Sydney's Showboat, enjoying there spectacular dinner and show cruise. The entertaining show was a risqué showgirls performance and the innovative three course dinner menu was delicious. All this whilst taking in the beautiful enchanting Sydney Harbour skyline and views. #cruisingdarlingharbour 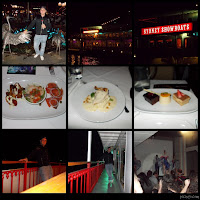 Right now, I've left Sydney and I'm back in Las Vegas. My visa was due to expire on 1st October 2013 and I made no provisions to renew it. I'm okay with it though and really feel like I made the most of my time in Australia. It's in the past now and I'll look back on my time spent there with fond memories, warm feelings and a special place in my heart. So that brings me to here, I priced up flights to go home to the UK and it was only an extra $1,000 to fly via Las Vegas. So I flew here on Thursday 11th July and I'm spending nineteen nights here at The Quad Resort & Casino. I'm flying back to the UK Tuesday 30th July which arrives on Wednesday 31st July, whilst I'll be excited to be back home in England I'll have no time to enjoy it as I'm going to Benidorm for a lads holiday the following day on Thursday 1st August. So lots of exciting times ahead and I'm really stoked about seeing all my friends and family.