As mentioned in my last and final Australian Digest I've now left Sydney for good and currently relaxing in Las Vegas until the 30th July. I flew in on Thursday 11th July and checked into The Quad Resort & Casino for nineteen nights. The first night I ate dinner at Hash House a-Go-Go and played a small 500nl session at Caesars Palace before heading to bed for an early night to beat the jet lag.

The following morning I relaxed by the swimming pool for a couple of hours before heading back to Caesars Palace. Here I met Jack Ellwood for lunch at Munchbar and traded some dollars for pounds so we both got a better rate than through the travel agent. It was great to see Jack again and catch up with him, I hadn't really seen much of him since his rise to pokers elite. We chatted a fair amount and I learned some interesting stuff about a lot of the young Brits.

Jack had to leave to catch his flight back to the UK shortly after so we said our goodbyes and I headed in to Caesars Palace poker room again to play some 500nl. This was an interesting table including 2006 main event winner Jamie Gold. I had played for around eight hours and had a small $200 profitable session which after getting 99 vs. KK on a 49Kr flop for a $1,400 pot I was pretty pleased about. The following day was much of the same, I relaxed by swimming pool throughout the day and hit up Caesars in the evening for some 500nl. I recorded a $1,200 losing session after a mixture of bad beats, set-ups and some tilting towards the end.

The next morning (Sunday 14th July) I decided to head over The Rio for the $365 closing event of their 2013 Carnivale of Poker, things didn't work out as I bust with QJ vs. TT getting it in on a x9T flop. I sat next to a an American guy named Josh Atkinson, who I'm familiar with from playing cash at The Wynn back in April. So it was nice to see him again and catch up, he's a good guy and really nice company. I'm now friends with him on Facebook and hope to see a bit more of him during my time spent in Las Vegas.

That evening I headed over Bellagio as Caesars had no 500nl game running. Another interesting table this time including 2006 LA Poker Classic champion Kenna James. This was a sweet session as I was already winning pretty big when I scooped a $8,000 pot with JJ vs. 88 getting three streets and finally shoved the river as the board ran out AJ822. I've actually had three huge set-ups since I've arrived in Vegas, two which I lost 99 vs. KK (49Kr flop) as mentioned above at Caesars and KK vs. AA all in preflop over at Wynn which I'll come to later. But I can't really complain too much about those as the JJ vs. 88 (AJ822 board) was worth twice as much as they other two combined. The following day I took things easy and kicked it by the swimming pool all day before heading to Wynn to play some 500nl on the evening. I was having a sweet $1,200 profit session when I picked up KK and got it in preflop vs. AA, I had $2,200 vs. villains $1,500 stack so that dropped me down to $800 and I cashed out straight afterwards recording a $200 losing session.

The next day (Tuesday 16th June) I headed over The Venetian to get involved with the $400 DeepStack Extravaganza III event, although it was actually held in there sister property The Palazzo. I played this tournament like a complete dick head and ended up calling off with QJ high on a 2KKK4 board vs. some guy who was just never bluffing. After this I decided to take a step back from poker and booked tickets to Illusions show over at Riviera Hotel & Casino from Tix4Tonight. This show is headlined by German magician Jan Rouven and I really enjoyed it, I love magicians and especially seeing them live. I've seen all the top magicians in Las Vegas (David Copperfield, Criss Angell and Penn & Teller) and all those three mentioned have tickets north of $100. I paid $60 for front row tickets to Illusions and Jan was just as good as the other guys, definitely worth checking out as a cheap option in my opinion. 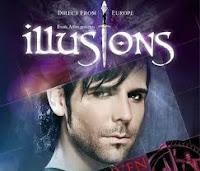 After the show I headed over to Caesars Palace to get involved in some 500nl action. Another profitable sessions as shown in my photos below, I just ran like god and won pretty much every significant pot for like twelve hours. 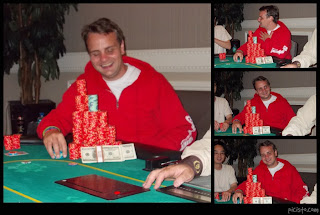 The following day (Wednesday 17th June) I relaxed by the swimming pool. My good friend Paul Armstrong got married at the weekend and he's flying into Vegas on Thursday 18th for his honeymoon, he's asked me to kind of be his tour guide and I'm really stoked about seeing them both tonight. In preparation I decided to head to the Salon at The Quad and get my hair cut, styled and coloured all for $195. I'm really pleased with my new do and have some natural blonde looking streaks, so ready for tonight and the blue blazer will be coming out to play. That brings me to right now, it's 7:30am Thursday morning here in Las Vegas and I'm just finishing this off before heading to bed. I've been playing 500nl over at Wynn all night, I had quite a few swings during this session but ended with a small $150 profit. Check back next week for American Digest Volume 05 to see how I've been getting on with the cash sessions and what I got up to with Paul and Kayleigh whilst they honeymooned here in Las Vegas.