I'm back in the UK after an awesome month of sun, drink, girls, and nice restaurants over in Thailand, it's actually pretty scary exactly how much I must have drank over the month and very detrimental towards my liver. So I'm kind of happy to be back home to give my liver a bit of a detox, it's nice to feel fresh again although a little jet lagged. The majority of Thailand stories simply aren't appropriate for FTP, so for that reason I won't be looking to do a trip report. I would however like to share a cocktail/punch whatever you want to call it, equal measures (we used one litre each) of jagermeister, after shock, sambuca, tequila, and vodka all mixed together creates JASSTV (using the first letter of each spirit). I decided to give it the big shot and drink seven double JASSTV's mixed with red bull before leaving my hotel room, I have absolutely no memory of the night but I woke up in a bar opposite my hotel 11:00am the following morning. 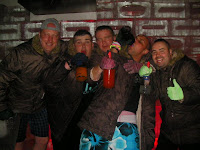 Played the £2,000 guaranteed over Circus yesterday and was great to catch up with my family and a few of the guys, including Gaz Walker, Dave Stephenson, Andy Blair, Dave Mount, Neil Harvey, and of course the always beautiful Celia Liu amongst many others. Lots to look forward to this month with Circus launching a brand new weekly £5,000 guaranteed scheduled to begin this Friday, and of course the monthly £10,000 guarantee on Tuesday May 24th. All thanks to Jimmy/Spoona and all the guys over at Circus, keep up the good work everybody. Then of course the UKIPT arrives at Aspers on Thursday 16th June, which I'm like every other player in Newcastle really excited about. My schedule will likely include;

By Sunday June 19th if I failed to make either day three of the main event or day two of the £300 I will likely concede defeat and abandoned the £100 charity bounty, then again depends how much of a sicko I'm feeling but as things stand it's not scheduled in my calendar. The conclusion of the UKIPT will lead me nicely to my eighth visit to Las Vegas flying out on 23rd June with Mark staying ten nights at Bellagio, however a bunch of NPF/NEPF (complicated story which I'll come to) members will be their so it should be awesome.

Yeah a lot can happen in a month (or a few hours I guess), whilst I was away I understand their was a disagreement between the NPF moderators (Dave/Scott) and several NPF members (Gaz/Stephen predominantly) all four of which I consider good friends. Anyway the upshot to my distress was the NPF to be closed indefinitely, this was closely followed (I'm told within hours) by the launch of the NEPF which some members have migrated over to. As mentioned I consider all four mentioned above (and everybody else involved) to be my good friends, so if any of you guys are reading;

Dave/Scott – I fully understand and respect your decision to close the NPF, but if you are reconsidering (which is just the impression I'm getting reading the NPF facebook account) I would strongly encourage you to reopen the forum and friendly community.

Gaz/Stephen – Congratulations on the NEPF, it looks great and I will look to contribute as and when I feel my advice would help. Keep up the good work guys and I hope everything works out well.

Guess I'm kind of stuck between a rock and a hard place, I want the best for all my friends however I personally don't think two forums can coexist in the North East which brings the old adage an unstoppable force (NEPF) vs. an immovable object (NPF). Anyway it's not actually any of my business, but it's my blog so I'm sharing my thoughts on the whole situation.