As I type this, I'm sitting on my mates apartment balcony in Sydney, Australia enjoying a bowl of fruit and fibre with a cup of hot tea. It's 4:00am and all though not hot a very mild night, I've just getting back from playing $A2/$A5 over at The Star. I have an aerial view of the world famous harbour bridge and opera house.

I don't have a camera (lost it on my last night in Newcastle, D'OH), so stole the above photo from the internet to give you guys an idea of my view right now. Needless to say life is pretty good, and I'm grateful to be here and enjoying life to the full. For now though I'll turn back the hands of time, and discuss my last few days in the UK. The weekend following the UKIPT visit to Newcastle (Friday 21st September), I was out at my friends Danny Humble and Danielle Stephenson's engagement party. From here I ended up hooking up with Mark “archie4wolves” Mealyea, Scotty Hocking, and Jennifer Waugh. I guess most followers know how this night transpired, but for those that don't then check out Mark's blog and particularly post #264 over the NPF;

I'm sure you'll all find the story highly entertaining, although naturally very disorganised we both made the most of it and had a great long weekend. Check out a few photo's from the trip; 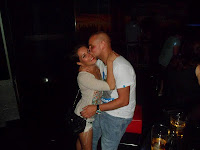 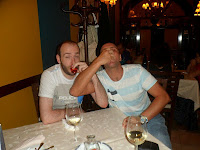 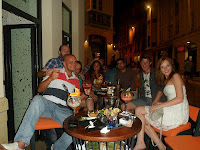 Then my final weekend in Newcastle was spent partying pretty hard with a bunch of friends from both the poker community and away from the felt, huge thank you to everybody that made it to my leaving-do on Friday 28th over at Babucho Bar & Restaurant. Their was like 20+ people there, and I was delighted to see each and every one of you. I also got some very kind personal messages from friends who couldn't make it due to work or other commitments, which was very heart warming and appreciated guys. My actual final week I partied really hard, here is a couple photo's one from Alison McAree's leaving-do and another from KOOSDAY Tuesday 25th;

To close off my time in the UK, I would like to take this opportunity to give a special mention to two of my good friends from back in the UK. These more pressing issues than reading about nights out around England, Europe, and Australia. There is a thread over the NPF regarding the well-being of my close friend Steve “CGK” Wills, who without going into any detail was admitted to hospital around the beginning of September. Fortunately the latest news from his beautiful wife Dawn, was that his health was improving and his spirits were high. My thoughts and prays are with you Steve mate, stay strong and make sure your around when I get back to the UK.

A more sour issue I read some very disturbing news that my good friend Terry Bland, sadly died in tragic circumstances the first weekend in September. I met Terry in January this year, whilst flying on a British Airways flight from London Heathrow to Las Vegas. He featured in my article;

Anybody reading will see what an absolute gentleman the guy was, whom I showed an abundance of respect. My thoughts and sincerest condolences go out to his family and close friends, I only met the guy once but will never forget and look back fondly on our one night spent together. RIP Terry, gone but never forgotten my friend. 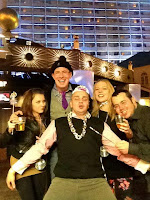 Now all my facebook friends will know I had a pretty rough first night in Australia, spending it in St. Vincent’s Hospital after taking a rather bad fall down the stairs. I was admitted around 3:30am and had several stitches to my forehead, my right is very black and bloodshot, I suffered a bad case of concussion as doctor explained to me I thought it was March/April and I was in Vegas. Which brings me to the present, as mentioned at the start of this digest it's like 4:00am and I've just walked in from the casino. I have an appointment back over at St. Vincent's Hospital at 7:00am (10:00pm UK) for surgery to have three metal discs inserted into my face to rebuild my cheek bone, to my friends amusement he got a couple of photo's which I'm cool with and I can look back and laugh at now. 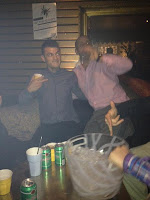 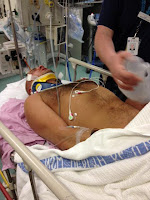 Between being discharged from hospital and and right now, I've stayed clear of the alcohol as I still feel a little fragile and the black eye doesn't do me any favours. In the meantime I've been proactive and got myself an Australian phone contract (+61(0)481119558) if you need me guys, set up an Australian bank account, sent away for my Australian drivers license, and enquired about getting my own apartment. For those familiar with Sydney I'm looking at the Pyrmont (for the casino) and Bondi (for the beach) areas, so will weigh things up and bounce some ideas of my mate (who arrives 17th October) to see where he would prefer. Then on the evening's I've been visiting The Star casino which is hugely impressive, it's as big as the majority in Las Vegas and has around eight bars and restaurants, the very popular garden buffet, all-suite hotel, Sydney's premier nightclub Marquee, amongst all other amenities you would expect to see at a mega casino resort. I've been spending some time in the poker room playing cash games and introducing myself to the dealers and players, as I expect to be around a while I'm hoping to make some friends on the Sydney poker circuit.

When I next stop by I should be able to let you know how my operation went today, as well as how I'm fairing on finding an apartment and employment.

Thanks for reading as always guys
Posted by Daniel Trett
Labels: Trett Digest